Ceremonies and Poojas of a Maha Kumbabishegam 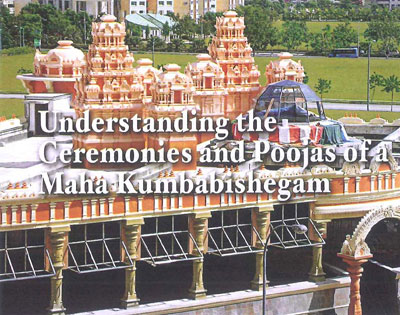 When a temple has been newly built, relocated or renovated, a ceremony of consecration (blessing) and devotion called the Maha Kumbabishegam is held. A series of elaborate rituals are carried out when the deities in the existing temple are moved to the new temple. The rituals are grand and take place over a period of about five months. During this time, very rare yet sacred, ceremonies are performed to invoke and transfer divine powers from an old or existing temple to a new or renovated temple.

It begins with Yenthra Pooja for 48 days followed by the Yagasalai. These sheets will be placed in the base of the pedestals in the new temple where the deities will be installed. Yenthrams are the channel of power for the deities. This power is reinforced with chanting of prayers for 48 days.

Religious verses are chanted for Lord Vinayagar to seek his blessings to clear obstacles.

The ceremony is performed to please Lord Vinayagar to ward off evil and hindrances as well as to ensure that the Maha Kumbabishegam progresses as planned.

A temple's doors are ceremoniously opened with the chanting of Holy Scriptures (Vedas) and Hymns (Thevarams). This is followed by ceremonies to cleanse the temple and prepare for the yagasalai. 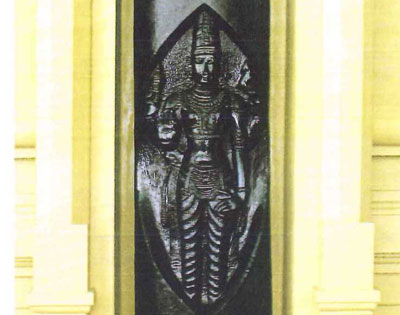 Prayers in praise of Goddess Lakshmi are described as Sri Sooktham. These prayers are recited with offerings of lotus flowers, vilva leaves, fruits, sandal and auspicious items for the continued presence of Goddess Lakshmi - of light, fortune, luck, beauty and fertility.

According to Hindu scriptures (Agama Sastras), sixteen different forms of splendour exits in temple deities. As such, before these temple deities are moved from their existing place, their powers are transferred to holy vessels protect the qualities of the deities while they are moved for renovations or reinstallation in a new temple. This ceremony marks the end of Poojas (ceremonies) in the old temple and all subsequent will be held at the new temple.

A ceremony conducted to ensure that the procession of holy vessels to the new temple is most auspicious. It is also carried out to see that the sanctity of the deities is properly preserved. 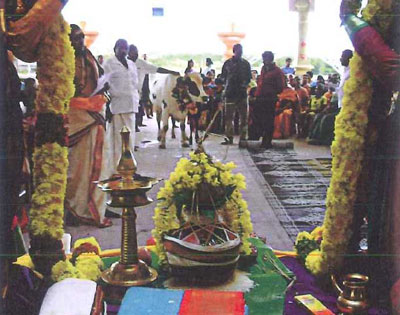 The Decorated holy vessels charged with divine powers would be brought in procession to the new temple. When the holy vessels arrive at the new temple premises, they will be carried by the Sivachariars (high priests) to the sacrificial alter (yagasalai) designated for each deity.

The Yagasalai, where sacrificial rituals are conducted with an altar of fire, is now ready at the new temple. The holy vessels containing blessed water to be used for the Maha Kumbabishegam will be placed and sanctified here. In the morning and evening, religious verses will be chanted to continuously invoke the powers of the Gods into the holy vessels.

Prayers are performed for the nine planets (navagrahams) to ward off any problems and reap the navagrahas benefits.

This is the ceremony where fresh mud is taken from the base of a tree and used in the area around the Yagasalai, the place where sacrificial rituals are conducted with an altar of fire. The yagasalai would be set up in advance at the new temple. Prayers are performed for the Goddess of Earth (Booma Devi).

Nine kinds of pulses are also sown in the blessed soil that is brought to the new temple.the growth of plants from these seeds symbolizes the prosperity of the new temple. 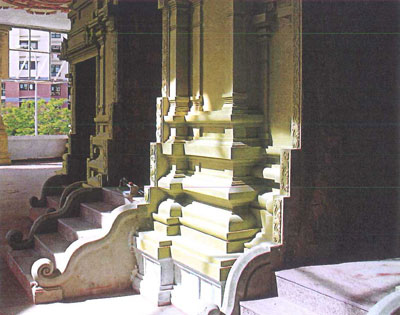 Priests are blessed and protective bracelets are tied on their hands to protect them. Varanam is where invited priests performing the rituals are offered special garments and are assigned to their specific duties during the Maha Kumbabishegam.

In this ceremony, the gold plated pinnacles (kalasams) are fitted on the top of the roof of the new temple. This is also the day the temple's sculptors are honoured.

Silver pots or vessels (kumbams) are filled with blessed water. The number of holy vessels prepared would depend on the number of deities in the temple. These vessels would represent each of the deities of the temple.

Once the holy vessels are placed at the yagasalai,deities are invoked in the fire (Agni) of the fire pit (homa kundam) too. A ceremony called Agni prathistha is first performed for beginning the fire for the fire pit(homa kundam).Deities are worshipped by offering in the fire pit various types of branches(samith) from the papal(arasamaram),mango, and jackfruit trees. Sweet items, fruits and ghee are placed as offerings in the fire. Priests recite special prayers(moolamantras)for each item of offering placed in the fire. The recitation of the prayers thousands of times increases the power of the deities invoked in the holy vessels.

Poornahuthi is the concluding ritual of each day's fire rite(homam).Following the poornahuthi, the priests will ceremoniously wave a camphor lamp over the fire pit and holy vessels(kudams).Verses from the four religious texts (Vedas) are recited along with the singing of hymns(Thevarams).All devotees will be blessed with the recitation of blessings(asirvathams). 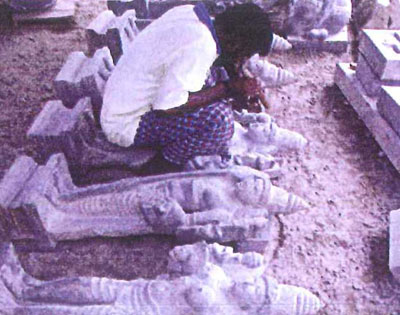 With 48 days of Yenthra poojas performed, the yenthrams or square gold sheets are now ready to be ceremoniously placed in the pedestals(pheedams)built at the new temple for each one of the temple's deities. It is on these new pedestals that the deities (Vigrahams) would be installed.

After the yenthrastaapanam, devotees are given the opportunity to place nine precious stones (navaranams), gold and silver rice and even personal pieces of gold jewellery on the gold sheets placed inside the pedestals.Devotees do this to have their all wishes full filled.

Eighteen different types of invocations are performed for the deities to give them a gracious look. The deities are kept in grains of paddy (dhaanyam), water (jalam), and flowers. The images are also left "resting" in new clothes on beds under blankets. Before the deities are fixed onto the pedestals, the all-important ritual of Nayanonmeelanam where the eyes are fixed on the deities is done.

Ashtabhandhanam is performed by the chief sculptor (sthapathi) and it involves fixing the deities (Vigraham) to their pedestals (pheedam) using a special adhesive paste and developing a bond between the two. Due to the corrosive.