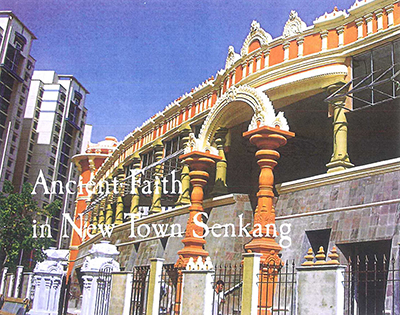 First and foremost, its ornate architecture, dimensions, carved images and motifs, sanctums and even the lay of the land are all full of metaphysical meaning and purpose. In an effort to Enhance the grandeur of the shrine a raised dome like structure above the sanctum sanctorum has been fashioned, moving away from the hitherto-used pyramidal roof. One cannot also miss the vitality of the carvings on the outer columns of the hall and ambulatory path. In terms of scale, it blends modestly in with the modern housing Structures Which Surround it. Style wise, its domed tower roofs bear elements of multi ethnicity and appear to compliment even its neighbouring Taoist temple and Prayer Hall. As a whole,AVGMT stands as a beautiful Hindu edifice representative of the time, the people, the neighbourhood and might add, of the nation's temple has scored several firsts even before the completion of the actual temple structure. Three temples with very different traditions of worship and history merged to form the temple society of Arulmigu Velmurugan Gnanamuneeswarar temple. The three temples -Sri Krishna Bhagawan Druga parameswari temple (formerly at Jalan kayu), Sri Mariamman muneeswarar temple (formerly at Jalan kayu) and Arulmigu Velmurugan temple (formerly at silat Road)- were brought under one roof and with the timely assistance and support of the Hindu Endowments Board,have been housed temporarily at Serangoon Road since 2001. Scarce Singapore and AVGMT is the first of its kind.

Making the temple relevant to the times has been the focus of the management committee of AVGMT. With this in mind, the temple was constructed to accommodate a preschool centre with in its lower floor. The decision to open a preschool providing free educational services for disadvantaged families is yet another first.

AVGMT set a new standard in Hindu temple development in June 2004 with the conduct of the Sangustaapanam Ceremony where 1008 sangus(conch shells), a symbol of Goddess Lakshmi and believed to bring luck and prosperity, were placed ceremoniously in the base of the main sanctum structure by devotees. Never before has a ceremony of this nature been conducted in this part of the world! AVGMT sprang another first with the conduct of the auspicious Bramaranthira Staapanam; a ceremony where precious stones and metals are placed on the top of the temple dome adding to its divinity what set this auspicious ceremony apart from any conducted before was the involvement of common folk in a most sacred ritual conducted usually by priests. This one must add, is a noteworthy step forward in making the religion, temple and worship relatable to one and all, need for a place of which goes beyond addressing its religious needs. The final form of the temple is definitely majestic without being overly ornamental. 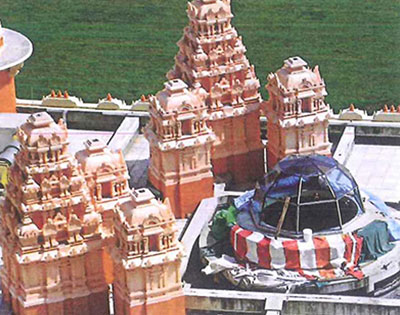 What sets AVGMT apart from all other Hindu temples ever built in Singapore? It may not be known to many that this modern day.

The evolution of AVGMT is indeed history in the making. Each of the three temples which make up today's Sengkang sanctuary has an inspiring story to tell. Sri Krishna Bhagawan Durga parameswari Temple began as a refuge for early Indian settlers in the Seletar and Jalan Kayu areas back in the late 1940s. Its modest altar housed the deities of Sri Vinayagar, Sri Krishna Bhagawan and Sri Durga Parameswari. Over the years, this remarkable little temple came to be known not just for its divinity, but Strangely, also for its delicious paal payasam(sweet milk porridge) which was served on Saturdays to all in its vicinity, the milk used for making the paal payasam came from a cow which was owned by the temple. Surprisingly so much milk was produced daily that i was sent for use at other temples! The history of Sri Mariamman Muneswarar temple though traversed with mysticism is known for the wonders of spirituality experienced by devotees who frequented the place since it was first established. In 1972, this quaint temple had sanctums erected for Sri Kailaya Ganapathy, Sri Muthumariamman, Sri Gnana Muneeswarar, Sri Veerapathirar and Sri Subramaniar. Many local Indians, who worshipped at the temple in its early days, continue to do so even after its relocation, maintaining a strong religious affinity to its deities. Arulmigu Velmurugan Temple, built in 1960 at Silat Road, served the largely migrant population of Indians living in the vicinity of the Malayan Railways. Many today still remember the simple festivities that were held at the temple in the early days. In the 1970s this little temple was popular with kavadi bearers during Panguni Utiram, a festival celebrating the celestial marriage of Lord Subramanya to Theivanai, the adopted daughter of Lord Indra. What is interesting is that all three temples have been managed by persons with visions of building a lasting structure to house their deities. Though plagued by the uncertainty on the availability of suitable land, making do with temporary housing conditions and a having to raise large amounts of funds for temple construction, these people never lost their faith and hope. Jointly, the temple society of Arulmigu Velmurugan Gnana Muneeswarar temple, since its birth in 2000, has raised more than $6million for the construction of their vision sanctuary at Sengkang.